Ever wondered what goes on behind-the-scenes of a video? We have been lucky enough to be interviewed a couple of times that Yuni Chan is such a natural on camera already! Recently, we were featured by The Good Guyde and we thought we would bring you along to see what happens during a video interview. It was a day-long process so enjoy all the pictures and behind-the-scenes videos!

The Good Guyde was conceived by founders Maven Potter, Piya Chee and Louis Ng. They wanted to have a channel to tell stories about interesting people and issues close to their heart. The Good Guyde has covered stories such as the oldest cosplayer in Singapore, a Chinese Singaporean who converted to Islam, even more serious topics like Depression and Dementia. All the crew in The Good Guyde have little or no film production background, they just came together to form a motley crew and the rest is history. We resonated with this, so we were really honoured to be featured by The Good Guyde!

Behind-the-scenes: Crew for the day…

The crew for this shoot is Louis, Jeanette, Nas, Preston, Joash, Abel, and Jing Yuan. They arrived bright and early on that morning to set up. There is a lot of preparation needed for a video shoot. Hair and makeup, setting up of cameras, lights, and extra equipment, positioning the talents (in this case, us!) and props like tables and chairs to be ready for the interview…

Usually, the crew will help us look neat and presentable before they begin the shoot. And because Yuni Chan is naturally beautiful, she didn’t need her hair or makeup done. While we were getting some light power on our face, Yuni Chan was showing off her rainbow mane!

The Interview Process – what goes on behind-the-scenes?

The interviewer will asks us questions and we will answer them as if we were chatting to a friend! Sometimes they will get us to repeat our answers if we miss out a word, or if we can phrase it in a better way. If the interview goes on for a long time, we will take breaks half-way to touch-up and refresh ourselves for the second part of the interview.

After the formal part of the interview, they will shoot the talents doing “normal” stuff to be used as extra footage for the video.

The crew will give us directions on what they want us to do.

Here are more shots of the crew directing Angie.

Then… the magic happens…

We don’t get to see this part, but afterwards the crew will bring the footage back to their studio and editing suites to start working on the video. Several versions of the video will be made until they are happy with the final product.

And here is the final video!

We would like to thank The Good Guyde again for the wonderful feature and the video. Thanks Louis, Jeanette, Nas, Preston, Joash, Abel, Jing Yuan again for making our interview such a breeze! We had such a good time during the shoot and absolutely love the animation they did of our amigurumi friends!

Don’t forget to watch the video and let us know what you think!

We also hoped that you liked our post with all the behind-the-scenes video footage. If you are curious about anything else that we do here in Tiny Rabbit Hole, leave us a comment and we might just share it in the next post! I'm the designer and maker of the cute amigurumi found at our little hideout – Tiny Rabbit Hole! In this blog, you'll hear us share about our random whimsical adventures and crochet stories, and occasional free patterns that are cute and fun to make =)

Interested to collab with us? Send us an email at angie@tinyrabbithole.com 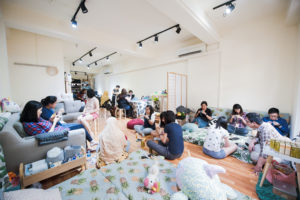 I HEART U – How to crochet a heart

Easter is the time to keep a Tamago Bunny!